International football, at least in Europe, has been given a much needed shot in the arm by the introduction of the UEFA Nations League. The tournament has proven to be a hit in its inaugural edition as meaningless friendlies have been replaced with competitive international football that actually has something riding on it. And yet, for all the success of the Nations League, fans up and down the country were delighted to welcome the return of domestic football.

That is especially true for fans of the teams pushing for promotion out of the Championship. The race for the top two positions and the six playoff places is bubbling along nicely with any number of teams still in with realistic chances of making it up into the promised land that is the Premier League.

At the time of writing (27th November 2018) it is Norwich who are setting the pace at the top of the Championship. The Canaries were far from fancied as promotion contenders at the start of the season and their rise to the top of the table speaks to just how competitive this division is. Those who backed Norwich for promotion just a matter of weeks ago will be sitting on a very good price which they can either trade out for a profit or let run.

It remains to be seen whether the Norfolk outfit will be able to hack the pace and which of the most fancied teams will live up to their billing. The only thing we can be sure of is much more uncertainty which means just one thing for punters: opportunity. So, let’s have a look at the teams in the mix and see if we can pick out some value options in the race for promotion from the Championship.

Leeds Keen to Prove They Haven’t Been Found Out

The appointment of Marcelo Bielsa as the new manager of Leeds United was one of the biggest stories in domestic football over the summer. This was a huge coup for Leeds and for the division in general. Bielsa has a reputation as being the football hipster’s favourite, thanks to the style of football he’s employed during his career, the many great managers he has influenced and his combustible nature.

It’s fair to say that Leeds hasn’t been the best run club over the years so it was understandable that critics were less than convinced a manager nicknamed ‘El Loco’ would be the man to lead the club back to the top flight. The Leeds fans needed no such convincing. They bought into the mystique about Bielsa as much as his previous achievements as a manager and have, by and large, been delighted with what the team have served up so far.

Leeds have shown themselves capable of playing some wonderful football at times. Intricate passing moves are not all Bielsa works on in training. His team press intelligently and are so good from set pieces that they have scored more headed goals than every team except Aston Villa.

It’s not all rosy for Leeds though. Their thumping 4-1 defeat at the hands of West Brom gave rise to fears among some fans that Bielsa’s methods are being worked out. That’s almost certainly an overreaction but after seeing their team falter after strong starts those worries are not without merit. The market is concerned enough to see Leeds pushed out to a general 7/2 for the title but the unpredictable nature of the division means a bet on Leeds to be promoted could be wiser at evens with bet365.

How Long Can Norwich Hack the Pace?

It’s relatively common for a Championship team to recover from a poor start to the season and win promotion to the Premier League. Fans of Stoke, Aston Villa and Nottingham Forest are hoping that their team will be the latest to make a run up the table just as Norwich have done. Things are so tight in the second tier that a run of four or five wins can see a club shoot up the table and the Canaries have soared thanks to a significantly longer run of great results.

Daniel Farke looked to be destined to join the list of Championship managers who had already lost their job as a result of guiding Norwich to just one win in their opening six matches. Things changed with a 1-0 win against fellow promotion hopefuls, Middlesbrough. The Canaries then won all but two of their next 12 matches, scoring a hatful of goals in the process.

Farke asked for patience during Norwich’s tough times and he’s pleading for calm now that things are going well. It’s taken the bookies a bit of time to start taking Norwich seriously but their price to win promotion to the Premier League has finally been cut so they are available at a best price of 5/4 with Betfred. They are also on offer at 9/2 to go up as Champions but there are reasons to think both of those prices could be a little short.

Just as Norwich were underperforming at the start of the season it now appears that they are overperforming. That’s what expected goals statistics suggest. Farke is delighted with the way that his forwards are taking their chances but how long can they keep overperforming in such a way?

The big test for Norwich will come when a few bad results come their way. It’s going to be as much about mentality as technical ability for Norwich and whilst a playoff place is well in their grasp, it may be worth waiting for the odds to change after a poor spell before backing the Canaries.

Will Attacking Intent or Rugged Pragmatism Win the Day?

Tony Pulis is not the most popular man amongst the West Brom faithful. The last weeks of his time in charge at the Hawthorn were characterised by complaints from the fans about the style of football their side were producing. West Brom have never had the most success but they have had some thrilling players and teams over the years and many fans were not prepared to put up with Pulis’ famously agricultural style of play, especially when results were no good.

Pulis was replaced at the Hawthorns by Alan Pardew but it quickly became clear that he was not the answer so the board turned to one of their own, Darren Moore, to try and inject something different into the team. Moore was always fighting an uphill battle to avoid relegation but he got the Baggies playing in a manner that got the fans off their seats and they enjoyed some big wins during his short time as a Premier League boss.

West Brom have continued in that exciting vein since Moore was appointed as manager on a full time basis. After 18 matches, the Baggies are the top scorers in the Championship and although they need to find some consistency, they are going to keep entertaining throughout the season.

In contrast, Middlesbrough, now managed by Pulis, are ranked only in the middle of the table for goals scored but have comfortably the best defensive record in the division. Middlesbrough fans may not be completely enamoured by the style their team are playing but they’re very happy to be second in the table.

It will be fascinating to see how the season pans out for West Brom and Middlesbrough. Boro secured a 1-0 win over the Baggies when they met back in August and Pulis firmly believes that his pragmatic approach is just what’s needed to sustain a promotion push. Neutrals would surely prefer the attacking approach of West Brom to win the day and the bookies are split with both sides available at around 6/4 to go up.

Of those prices we would be more inclined to back Boro because their squad looks a little better on paper. Moreover, the experience their manager brings to the table may prove decisive during the closing stages of the campaign when the pressure really ratchets up.

Derby the Value to Kick On

As already mentioned, there are a host of teams who could realistically win promotion from the Championship. Moreover, any number of teams are in with a real chance of breaking into the top two. The appointment of Dean Smith has breathed new life into Aston Villa, Nottingham Forest signed some exciting players over the summer and Sheffield United continue to exceed expectations under the management of Chris Wilder. It’s the price of 11/4 that BetVictor are quoting on Derby’s promotion chances that most catch the eye though. 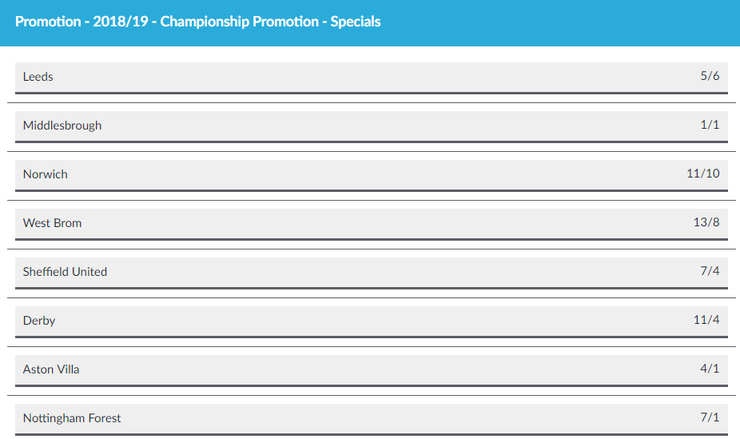 The big question mark about Derby is whether they can do what is necessary to get promoted under a rookie manager. Frank Lampard has done very well in the early stages of his managerial career but he’ll have to lean heavily on some of his more experienced contacts in the game if he is to guide Derby to the top two.

What Lampard has in his favour is that he is used to winning. The Championship is a different beast to the competitions that Lampard was used to playing in but he knows exactly what it takes to come out on top from a mentally and physically demanding campaign. He is also well known for his intelligence – he got an A in GCSE Latin don’t you know! – and that should be a huge asset the more he grows into management. His intelligence, not the Latin that is!

Derby are actually a little behind where they were at this stage of last season but that could be spun as a positive. This is a team who are used to pushing for the top six and the team look to have a little bit extra about them compared to a year ago. There is a belief in this squad that contains a good combination of youth and experience so look for Derby to be right up there in the reckoning come the closing stages of the season. 11/4 offers value in our eyes and now might be the time to get on.