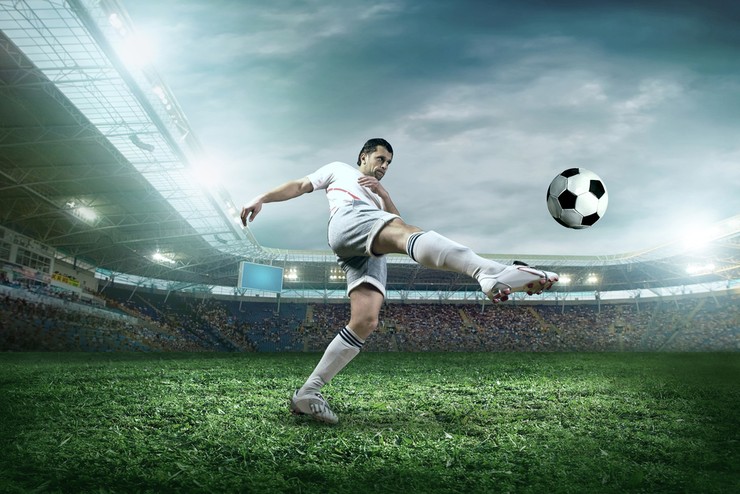 This is because you have 22 players that could all plausibly score a goal, 20 if you remove the goalkeepers, but keepers do score now and again – ask Peter Schmeichel. Football is a highly unpredictable game and betting markets that have a huge number of variables, like the first goalscorer market, make it even more so.

However, as with all betting markets, there are strategies and processes that you can put in place to try and make a bit of money from this. It’s not going to be easy, but we’ve some ideas and advice that you can apply to hopefully create a more water-tight strategy around this specific market.

What Position is Most Likely to Score?

The obvious way to start is by getting an understanding of which positions score most often. Once we have established this, we can drastically narrow down the players that we have to choose from.

In the Premier League, the scoring broken down by position is as follows:

Here we can see that the forwards are predictably the most likely to score, midfielders are next and then defenders bring up the rear. This is pretty obvious stuff, but what jumped out at us straight away was just how close the percentages were between the forwards and the midfielders. We thought the number would be much higher, so to see it come within just 10% has got us quite excited already.

The EPL index ran a study on the breakdown of goals per team and how that differed throughout the league. The data is a few years old now, but it’s still very relevant to the current Premier League, so we wanted to include it.

The above table shows the number of goals scored by all types of player for 10 Premier League clubs across a single season. The forwards in these ten teams scored the more than the forwards at other clubs in the league. In all cases but one here, the forwards score the most goals for their team. The exception to this is that of Arsenal, who’s midfielders scored more goals than their forwards.

There might be a number of reasons for this, and the most common is when teams only play 1-person up front. However, the index does include ‘attacking wide players’ as forwards who play in 4-3-3 type formations or similar.

This next table shows the ten clubs whose forwards scored the least goals all season.. This graph is probably more alarming as it shows that the majority of teams here (6 out of 10) see their midfielders score more goals than their strikers. Norwich City even have their defenders scoring as many goals as their midfielders, although they are the only team in the league to see this trend.

What Does this all Mean?

Before looking into this data, we were pretty sure that all teams’ forwards would score the most goals, but as you can see, this is not always the case. 7 from 20 teams had their midfielders score the most goals – that is 35% and a much bigger number than we expected to see.

To then apply this to betting we need to bear a couple of things in mind.

The first thing is that each team needs to be assessed on their own merits. It’s fine taking the overall league percentages of 47% for forwards and 37% for midfielders, but this won’t apply to teams like Swansea or West Ham or Sunderland based on the information above. You need to go through each team and apply the data from that team to the betting market.

Second, we realise that this isn’t the first goalscorer data and that if it were it would alter the results somewhat, but we doubt that it would have a massive impact. In fact, while the numbers might be different, the percentages would likely be very similar, so this is very relatable information for picking first goalscorer bets.

Which Positions Offer the Best Value?

Favourites for the 1st goalscorer market are usually going to be an attacking player. They tend to be priced around the 4.00 mark and they will offer pretty good value for the most part. Favourites that are longer priced can start to offer better value, even if they are less prolific.

Let’s run through an example of this from a Premier League game between Liverpool and Norwich.

Here we can see that Mo Salah is priced at 3.75 to score the first goal in the game. This equals an implied probability of 26%, which is roughly a 1 in 4 chance of scoring first.

In the 2018/19 season Mo Salah scored first in a staggering 12 of the 37 Premier League games in which he played. This is a percentage of 32%. If that were to be put into betting odds then this would be a price of 3.13, so the odds of 3.75 for Mo Salah to score first in pretty much any match are massively advantageous to the punter, assuming that his good form continues that is.

However, this isn’t always going to be the case for all forwards. In fact, the second favourite for this exact match is that Divock Origi.

As you can see, Origi is priced at just 3.8, only slightly higher than that of Salah. Last season he only played in 4 Premier League games total, scoring just once with no first goals at all. It’s tough to take the Origi bet here over Salah, especially given the price.

In terms of other positions, then you need to look at the defenders for the big value bets. These are often in the form of centre backs who are able to get forward into attacking situations for set pieces like free kicks and corners.

You can expect most defenders to be priced at 15.0 or higher, but even at 15.0 this is still decent value in our opinion. If you think that the highest scoring defender in the 18/19 season was Shane Duffy for Brighton with 5, then you are looking at an implied probability of 13% resulting in odds of 7.69 for an anytime scorer price. At 15.00 then you are probably getting a decent price, but you can find them much higher than this.

The first goalscorer market is really tough, and it’s one of the worst markets to bet on in terms of value as well. The bookies take a huge cut of this market and it doesn’t offer great value for the punter at all.

If you are still wanting to bet on this market, then we would advise you to look more at the players rather than just their positions. The Mo Salah and Divock Origi examples outlines perfectly two strikers who are similarly priced, but worlds apart in terms of quality and previous form. The bookies price is based on the player’s position on the pitch, which we’ve proven to be a flawed strategy.

The majority of the money will always come with the attackers, but we believe the true value comes from the midfielders – you’ve seen how many goals they chip in for each team. It is a harder call to make than picking a forward, however, as there are more midfielders than forwards.

You can apply your usual goalscorer strategy such as player form, set piece takers, forward thinking players, high percentage of shots on target, and other stats which will all help, but try to not let their position influence you too much, and don’t be afraid to get creative with this market. Bet small, have some fun, and you can’t really go too far wrong.