Handicap betting is one of the most underused and underrated betting markets in our opinion. It requires a certain amount of creativity to get them right but they can offer huge value, and can sometimes be the stand out market on certain kinds of matches.

A lot of people just use handicap betting when trying to balance the books for the favourite and get slightly longer odds, and whilst we agree that this works, we wanted to look at other ways in which this market can be utilised as well.

Throughout this article we want to try and give you a few alternative ideas of when to apply a handicap, both for and against, as well as explaining its most common use. We will be looking to see if there are any trends that make certain teams better picks than others and also in areas that you maybe haven’t considered before.

Taking on the Heavy Favourite

Despite wanting to come up with other ways to use this market, it’s probably best to explain a handicap’s most common use and highlight how this works and how it improves the odds when taking on heavy favourites.

There are a couple of ways that you can go about this bet. The first is by adding a handicap to the favourite in order to increase their price. On a 3-way handicap, if you apply a -1 goal handicap to a favourite you are basically saying that you need that team to win by 2 or more goals.

So, you may think that one team will win, but you don’t think they will run away with the game. This would be a good spot to add goals to the underdog in order to keep them ahead at full time.

The flip side of this is when you think the favourite could run away with the game and score at least 2 goals more than their opposition. In this case, you are better to remove goals from the favourite as this leaves you more wiggle room if they do score a boat load of goals.

Either way, the handicap allows punters to take games or markets that offer next to no odds at all on one team, and turn them into a real match with odds that are worth taking.

We’ve a game in the Premier League coming up between West Ham and Man City that we want to look at.

As you can see, Man City are strong favourites for the game and rightly so. They are reigning Premier League Champions and West Ham are a mid-table side at best.

But even priced at 1.22, the odds on City winning this match don’t hold too much value for the majority of punters. You need to be wagering £100 to get just £22 back, which won’t satisfy most bettors who are likely betting much lower stakes that this.

Form and past results can help us a lot here in trying to work out what a possible score line might be. Below we have included the last 10 head to heads between the two teams from Man City’s point of view. 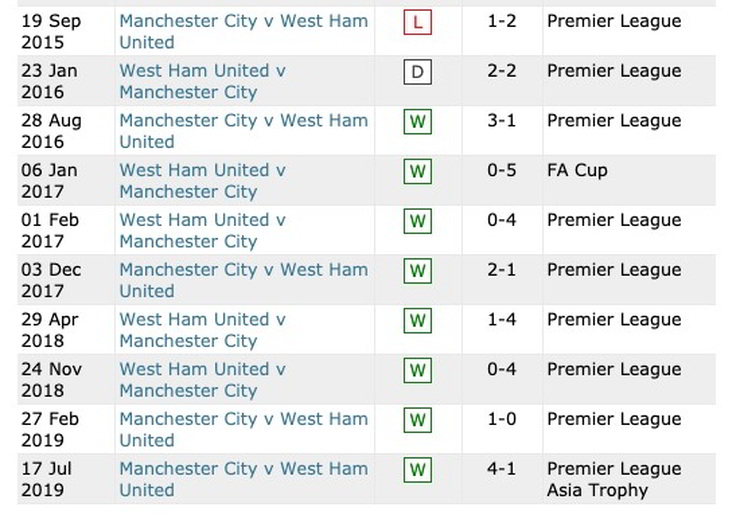 This would be a case where we could confidently be looking at City to win this match by 2 or more goals. 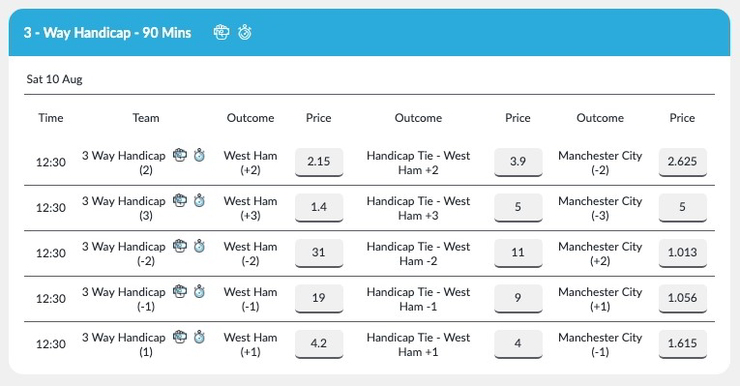 Looking at the odds on offer, we see that City are priced 1.61 at -1 goals and 2.625 at -2 goals. To be honest, both offer decent value and we could see arguments for either result. Even though West Ham are priced at 2.15 for +2 goals, we aren’t sure that they will be within 1 goal of the City score for this bet to come in. Even odds of 1.4 for +3 goals means that they need to be within 2 goals, which history would suggest that they have struggled to do.

These are the sorts of things that you need to be looking out for when backing the heavy favourites on the handicap. It turned out here that taking the negative goals on City would be the best handicap option, but this might not always be the case in closer match ups. 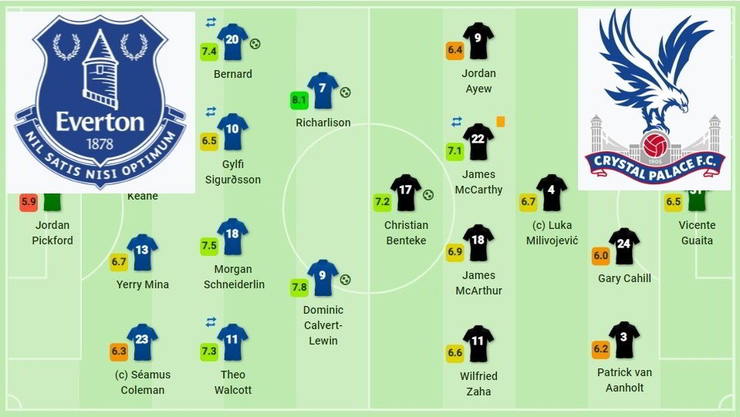 The heavy favourites are obvious choices for the handicap bet as it levels the playing field, but there are also opportunities to take on regular match ups to create even more from closer games.

A good example match would be a 2020 fixture between Crystal Palace v Everton. The teams are fairly close in terms of ability, but Everton are the stronger of the two teams overall you would have to say. The odds for the match are as follows:

Lots of the weight of Palace’s price will be based on the fact that they are at home, which gives teams and advantage that is reflected in the odds, but as we have stated, they are still a decent team and are capable of winning.

However, their form is not good versus Everton at all as you can see: 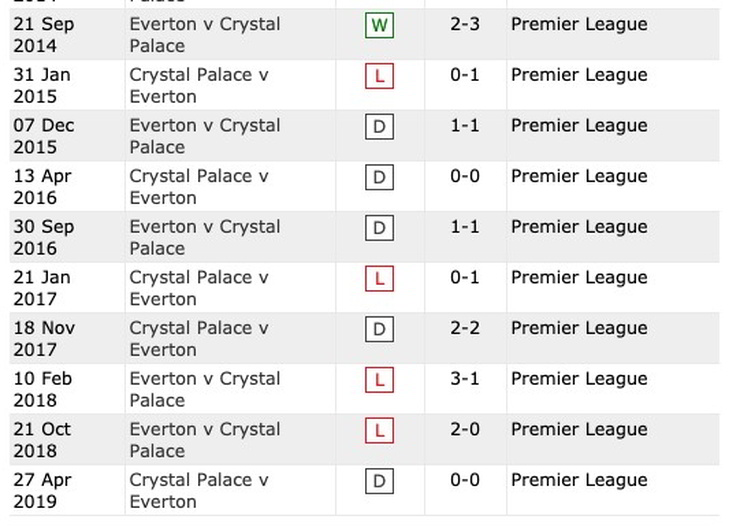 They’ve won just 1 game in 10 previous meetings, losing 4 but taking 5 draws, which highlights that this is a pretty even contest. Interestingly, Everton have won two of these matches by 2 or more goals, which works out as 20% of games. If we can get odds on a handicap bet of -1 for Everton at the right price, then there could be value here. 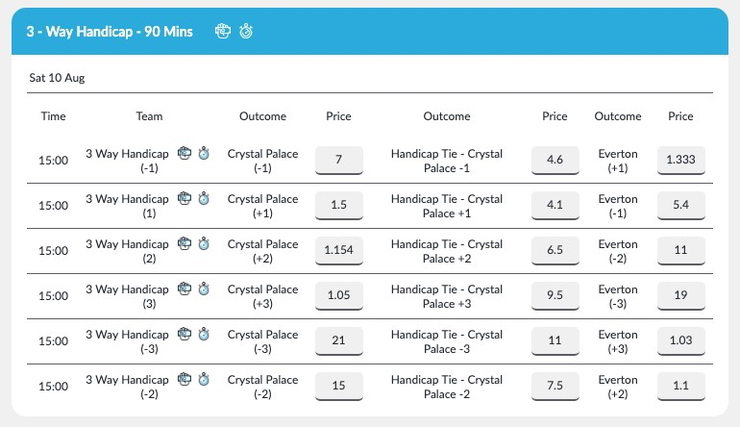 From the table above you see that Everton are priced at 5.4 at -1 on the handicap. At 5.4 this gives us an implied probability of 18.5%, which is very close to the 20% that we need. But the fact that Everton are away and the two wins by 2+ goals were at home means that we can discount this bet based on these odds. But there have been 5 draws from these 10 matches, and given that Everton are away this suggests that the draw could be a really good bet here.

We can actually use the handicap as part of this a well by backing the draw. There’s no doubt that Everton’s record is alarmingly good against Crystal Palace and whilst you could back the draw at 3.3 and call it good, we think a buffer is needed.

Crystal Palace +1 Handicap Tie is priced at 4.1, which means that Everton would need to win by 1 goal only and then the handicap will adjust to the draw for the bet to win. Given the past results and that the games are usually tight, we feel that this would be a really good use of the handicap for this game. It’s not your traditional use for the handicap by any means, but it’s one that works well in this scenario. There are two examples already from this meeting at this ground where this bet would have paid out, and that fact definitely makes this a more solid judgement.

League averages are something else that you can take into account when using the handicap. For example, the most common score line in the Premier League in the 2018/19 season was 2-0. The score happened 44 times which equates to 12% of the matches.

In the same season 168 matches ended with victories by 2 or more goals. This is 44% of the games played. But obviously this includes games with a 3,4,5 etc. goal difference as well, which means that there is even more value to be had if you can find those score lines.

The trick here is trying to work out a plausible score line for the match. Once you have that, using whatever research you need to make the judgement, you can then apply handicaps that might work well for that game. You can work out the odds, the percentages, and the implied probability from the given odds as well, which will give you a better idea. Don’t’ forget, if you think something happens less often than the bookmakers price, then this is good value.