The dreaded 0-0 full-time scoreline, otherwise aptly known as a bore draw. As a football fan, it’s rarely a score you ever want to see as these matches tend to be low on goalscoring chances and entertainment value. There are exceptions of course but on average, your typical goalless draw will be a decidedly forgettable affair.

You can try and hide from it but no football league or competition is immune from a 0-0 draw, no matter how much talent is on display. The Premier League may boast some of the finest attackers world football has to offer but goalless stalemates still occur and are they are not especially uncommon. This is something we can prove too as we have analysed 3,800 Premier League matches over the course of a decade, picking out all instances of 0-0 draws.

As well as simply being interesting to know, being aware of the frequency of bore draws may help you when it comes to betting too. Most Premier League matches will see a 0-0 full-time result available to back at odds of between 9/1 and 16/1 so decent returns are available should you pick the right match. This is no easy task mind you as all it takes is one mistake or moment of brilliance to break the deadlock.

The Stats on Goalless Draws

To ensure we had a generous sample size for our investigation, we looked at the result of 3,800 Premier League matches, starting from the 2011/12 season going right through to the end of the 2020/21 campaign. From the near four thousand matches, 284 of them did not see either side able to find the back of the net. This gives us a rate of 7.5%, meaning approximately one in every 13 Premier League matches ends up goalless. So, assuming you support a team with an average goalless draw rate, it is a scoreline you should expect to see three times a season. 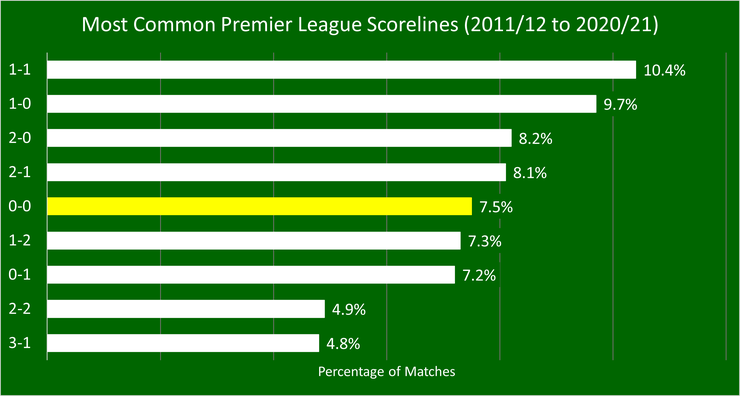 With regards to betting, a 7.5% probability translates to odds of roughly 12/1 so this is a good figure to bear in mind if you are ever looking to bet on a 0-0 result. It would be wrong, however, to assume that simply betting on any goalless draw whenever the odds are greater than 12/1 is a good idea. This is because not all fixtures are equal, some have a much lower likelihood of ending as a bore draw compared to others. Just taking the 2020/21 season as an example, Manchester United were involved in a whopping seven goalless matches while local rivals Manchester City saw just the one.

Back to the figures now and as you can see, goalless draws are not really that rare. Compared to other scorelines it is quite high up the list in terms of regularity. Looking at other draws, 1-1 is the only one more common with a rate of 10.4%. A 2-2 stalemate is much more unlikely at 4.9% and a 3-3 tie is even less common at just 1%.

As for victories, a 1-0 home win is the most popular non-tied result with a frequency of 9.7% followed by a 2-0 home win which stands at 8.2%. The only other correct scoreline that happens more often than 0-0 is a 2-1 win for the home outfit, something seen in 8.1% of contests.

A Season By Season Breakdown

We have established the average goalless draw rate but it is also interesting to know how much fluctuation there is between individual seasons. Are 0-0’s spotted at a fairly consistent rate year on year or are there some especially boring seasons in which there seems to be one every weekend? The data shows us there is a fair amount of variation but nothing truly wild. In the seasons looked at, the 2019/20 campaign had the fewest goalless stalemates at 21 whereas the most came in the 2012/13 season when there were 35, nearly an average of one bore draw per matchday. 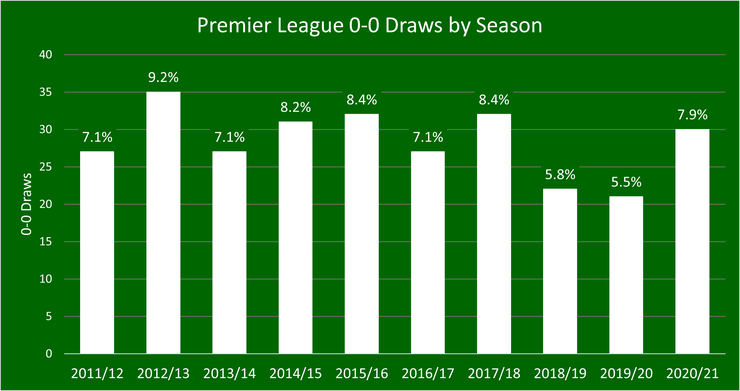 There is also a noteworthy difference between the first five years looked at compared to the second five-year period. The seasons between 2011/12 and 2015/16 saw 152 instances of the dreaded 0-0 scoreline but between 2016/17 and 2020/21 there were significantly fewer at 132. It is too early to conclude with confidence that the Premier League is becoming a little less cagey but it is nevertheless some good news for neutral fans. The declining trend has continued into the 2021/22 season too from the results seen so far. At the time of writing the season is still underway but from the 215 matches that had been played, 14 ended up goalless, giving us a rate of 6.5%, a full percentage point lower than the 10-year average.

Why Are Goalless Draws On The Decline? 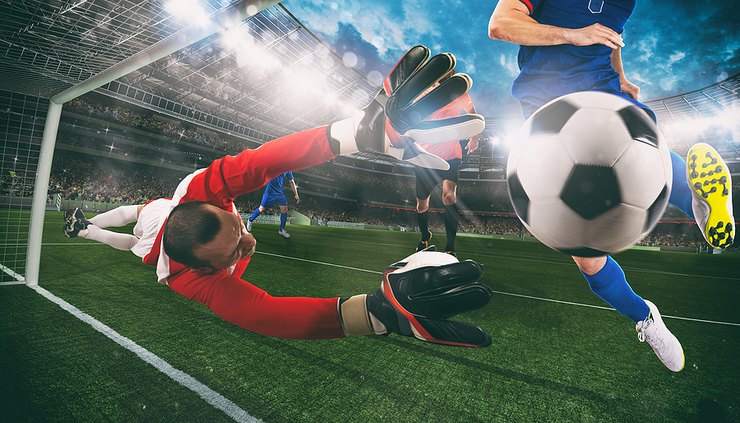 As for reasons why the rate of goalless draws might be dropping, it is not simply the case that more goals are being scored. Between 2016 and 2021, the average number of goals per game was 2.74, almost identical to the 2.73 goals per game for the five-year period prior. Ultimately, it is hard to pinpoint a reason especially when it could just be a natural fluctuation that will begin to return to the mean over the next few years.

If we did have to speculate though, an increase in the number of penalties (something VAR has contributed to) could well be one factor. Some games that would have previously ended goalless are now being separated by a (sometimes questionable) penalty that was given on review that might not have been given before the introduction of VAR. The average number of penalties per season between 2011/12 and 2015/16 was 88.6 while between 2016/17 and 2021/22 it stood at 101.

There has also been a reduction in draws that shows that teams are perhaps more willing to take a risk in order to get the three points, rather than being happy to settle for just one. Both the 2012/13 and 2015/16 seasons saw more than 100 draws, a milestone not breached in more recent years. Overall the last five full seasons have seen more than 10 fewer draws on average than the five years before it. While this also may just be a natural fluctuation, it is true that playing styles and the level of risk managers adopt change over time.

How Does The Premier League Compare With Other Leagues? 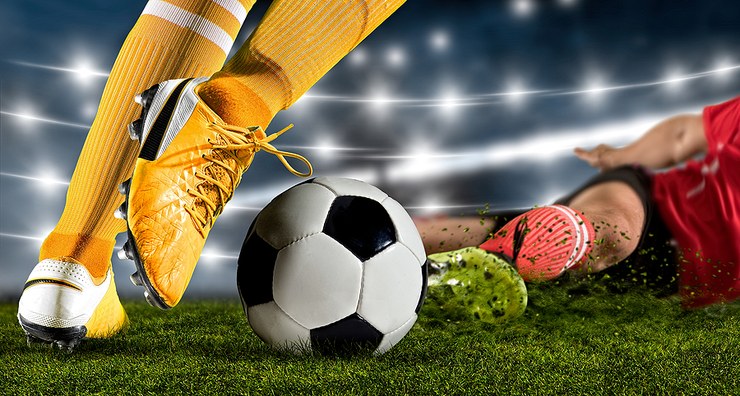 If you are desperate to avoid watching a 0-0, you could do a lot worse than the Premier League. Some smaller foreign leagues see an eye-watering frequency of goalless matches. The 2020/21 Croatian topflight for instance had 16.11% of matches end without a goal and the Serbian Super Liga was not far behind at 15.4%. These kinds of numbers are simply not realistic for the Premier League, even during particularly bad years.

When compared with other elite leagues on the continent, the Premier League still fares well. Although the famously attacking Bundesliga in Germany sees fewer goalless draws (5.3% over the past three seasons), the three-year average of Spain’s La Liga is a bit higher at 8% while you are also more likely to come across a 0-0 in Ligue 1 in France (7.6%).

So, as far as avoiding drab 0-0’s go, Premier League fans certainly cannot complain. Not only is the current rate lower than many leagues, but it is a rate on the decline too. This does not mean you should never consider betting on a 0-0 draw in the English top-flight but a targeted approach would be required. Although it is a league where a decent amount of goals are scored, there are always teams that have a defence that is considerably stronger than their attack. Sunderland in 2014/15 were a fine example of this as they managed to record a quite an outrageous nine goalless draws in a single campaign.

Betting On No Goalscorer Instead Of 0-0 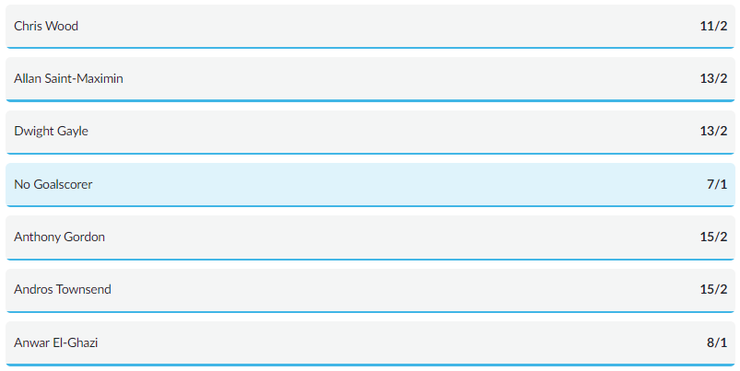 Because of this, if you think a match is likely to be goalless, it makes sense to bet on no goalscorer instead of the 0-0, assuming the odds are either the same or very close. In this way, you have the insurance in place that if the game doesn’t end goalless, but any goals scored were own goals, you’ll still have a winning bet on your hands. If you bet on 0-0 in the correct score market and even one own goal goals in, it’s game over for your bet.