Valentines Day 2005 was a landmark day in the Premier League. It had nothing to do with romance, rather it was the first time in a Premier League game that a team (Arsenal) named a matchday squad consisting entirely of foreign players. This milestone did appear something of an inevitability as a few years before, in 1999, Chelsea entered the history books for fielding a fully foreign starting XI during a top-flight English contest.

As the data will show, foreigners have had an increasing presence at the very highest level of English football. Whether their numbers wane a little in the post-Brexit era remains to be seen but the recently imposed restrictions on European transfers will need some time before their full impact is felt. Regardless of what the future may hold, for now let us focus on what the current state of the Premier League is when it comes to the involvement of foreign players.

What Does ‘Foreign’ Mean? 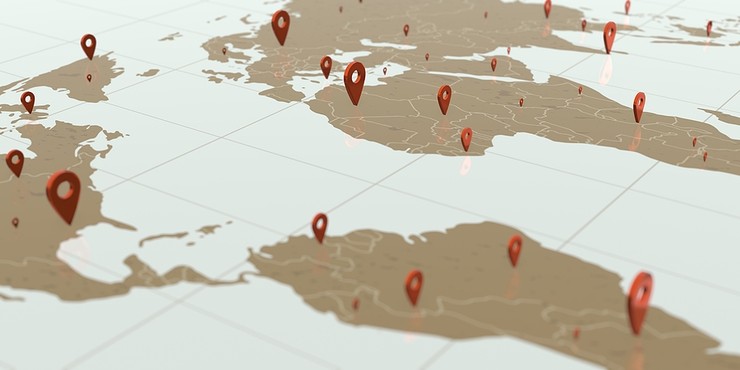 Before we take a look at the data, it is important to discuss what the term foreign actually means. In an age where an increasing number of players have dual or multiple citizenship, assigning one country to a player is not as easy as it used to be. There is no ‘fixed’ definition for foreign so numbers can vary depending on the source but many places will use the country the player represents on an international stage. This means that the like of Wilfried Zaha, was previously a non-foreign player when playing for England but he became one when changing his allegiance to the Ivory Coast.

In cases where a player has not featured in a senior international match, it is common to use the country of birth. If you look at Brentford’s 2020/21 squad, for example, they have two English born players, Ivan Toney and Ethan Pinnock that are eligible to play for both Jamaica and England. Pinnock has been called up for Jamaica and in doing so he became a foreign player; Toney, on the other hand, is yet to play for either nation so is still considered English for now. This will change should the striker don the Green and Yellow of the Reggae Boyz.

The Premier League comes with an added complexity because it is based in England. In normal circumstances, people have UK citizenship so it is irrelevant if you come from England, Wales, Northern Ireland or Scotland. No matter which of these countries you are in, you are not a foreigner even if you were not born there, at least legally speaking. For footballing purposes though, things are different as Scottish players in the Premier League will often be considered ‘foreign’. This is partly because all the home nations have their own national sides.

The matter is complicated further when you consider there are Welsh teams in the English league set-up. Although most Welsh teams play within their own domestic league, the likes of Cardiff and Swansea play across the border. In this case, quite bizarrely, an English player representing Cardiff would be non-foreign but a Welsh player would be foreign. While definitions are certainly up for debate, they will usually only make slight differences to the end data. In our case, we have used data supplied from Transfermarkt which considers all non-English (so either born elsewhere or playing for another country) as foreigners in the Premier League.

How Many Foreign Players Are There?

The data below shows the proportion of used squad players classified as foreign in the Premier League following the conclusion of the 2021/22 winter transfer window. 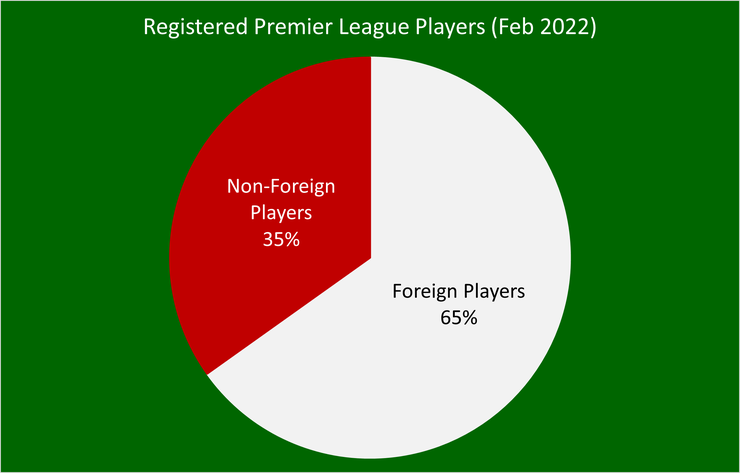 As the chart shows, foreign players outweighed English players by a rate of almost 2:1. For the exact figures, out of 508 players that had played at least one Premier League minute, 331 were foreign, giving us a rate of 65.2%.

The issue with only looking at the squad numbers though is that you do not get a sense of their actual involvement. If foreign players typically end up coming on as a sub or featuring only in emergencies then it is possible, albeit unlikely, that English players actually play more Premier League football.

In actual fact, foreign players end up taking as many minutes as their overall numbers would suggest. With 65.2% of Premier League representatives being foreign, they also took up 65.5% of the on-pitch time so there is almost no difference when it comes to participation levels in relation to the proportion of players who are foreign. 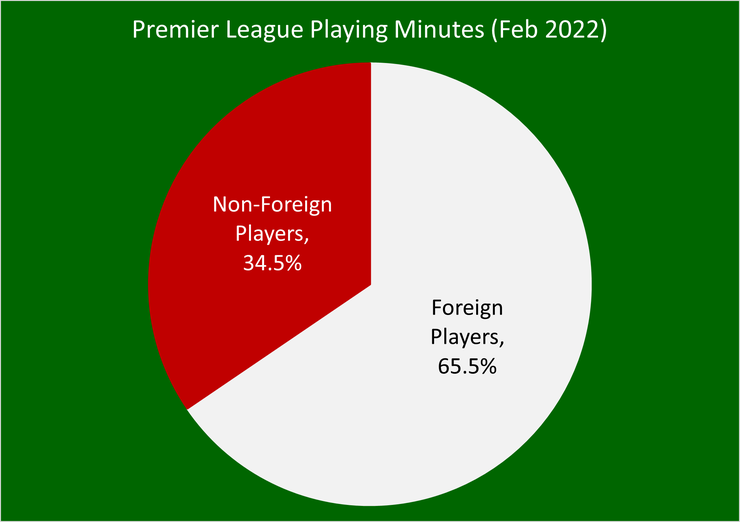 It is not as though the 2021/22 season was exceptional high by any means either. Go back to 2015/16 and the percentage of pitch minutes by foreign players was even larger at 70.9%. In recent years there has been something of a plateau with the foreign player minutes figure usually between 65% and 70% but it did take a short while to reach this point. The inaugural Premier League season started with foreigners playing just 31.2% of minutes, increasing to 44.3% for the 1996/97 campaign. The first time it breached 60% was in 2001/02, a year in which only West Ham gave more playing time to English squad members.

It is also interesting to look at a club-by-club breakdown of foreign players. As with all the other data supplied in this article, the figures are accurate as of February 2022, so immediately after the January transfer window.

Premier League new boys Brentford top the table when it comes to the numbers of individual foreign players used. From the 25 players to feature in the 2021/22 Premier League season for them (as of the time of writing), only four were English. Shunning home-grown talents, they have a distinctly greater Scandinavian presence which is very unusual for a Premier League. In terms of minutes played though, Watford have given more playing time to foreigners than anyone else. With English players getting just 15% of the action, this is equivalent to just two Englishmen playing 74 minutes per game each.

The only three clubs to favour English talent over foreign talent are Everton, Burnley and Aston Villa, although in the case of the Villans it is virtually even. For Everton, this is something of an anomaly as in the years prior they have had a substantially larger foreign representation. Burnley, on the other hand, have consistently flown the English flag. Since returning to the Premier League in 2016, they have always given more minutes to English players and the number reached as high as 75.1% in 2020/21, in excess of 20% more than the next ‘best’ team.

Clearly, Burnley are very exceptional in this area and their willingness to focus on English talent is no doubt something the FA looks fondly upon. It has certainly worked well enough for them, with the Clarets punching above their weight by staying in the division but it is unlikely to become a model any established Premier League team adopts.

We also wanted to take a look at which overseas nations are most represented in Premier League squads. Here we not looking at involvement, only if a foreign player is registered at a Premier League club. Ecuador, for instance, have one Premier League player, Moises Caicedo; but at the time of writing, he had only been an unused sub on three occasions in the league. The data also includes players that have been sent on out loan, but where their parent club is a Premier League team.

As expected, there is a significant EU presence but this is something that may wane a little in future. In total, there were 62 countries represented in the 2021/22 season so we will not provide you with the whole list, rather only the countries with at least five Premier League players.

From the 21 countries listed, only seven are from outside Europe and there is not a single nation from within Asia that features. To find any Asian involvement you would have to go down the list as far as Japan (2) or South Korea (2). There is also no North American presence with no country from the continent able to offer more than three players (Jamaica and USA).

Do Other League Have So Many Foreign Players? 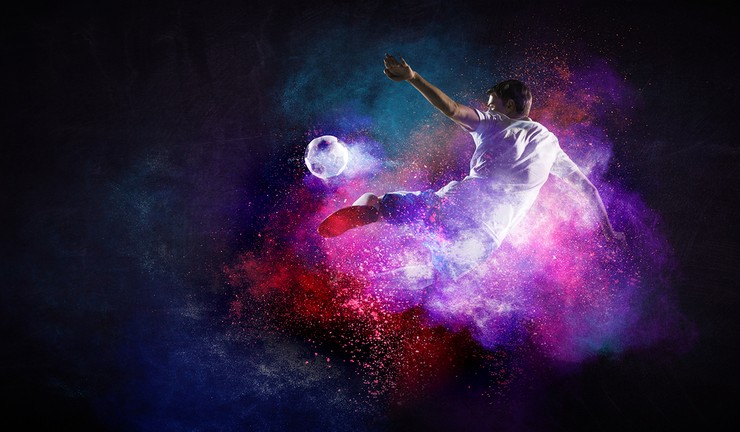 By now you will have a very good understanding of the foreign presence in the Premier League including where players come from and who they play for. The only question left to ask is if English football is particularly unusual in this regard or do most top leagues from across the globe see a majority of foreigners.

Thankfully, this is something the CIES Football Observatory looks at and they were able to supply some fresh data in their January 2022 monthly report.

In this report, they looked at the percentage of expatriate players, defined as a player playing “outside of the association where they grew up and from where they departed for football-related reasons.” Looking at data from the second semester of 2021, they found that from 15 analysed competitions, only Serie A had a higher expatriate representation (64%) than the Premier League (59.5%), in terms of minutes played. This is not something that seemed to hurt either national side mind you with both reaching the delayed Euro 2020 final.

The MLS quickly followed at 58.5% and the Bundesliga was not too far behind at 54.1% but all other leagues had more ‘local’ players than foreigners. This includes both La Liga in Spain (with 41.5% of players being ex-pats) and Ligue 1 in France (39.4%). By South American standards, it is inconceivable to have foreign involvement to the extent that the Premier League does. The top leagues in Argentina, Brazil and Colombia all saw less than 12% of all available minutes taken by someone arriving from abroad.