After signing Cristiano Ronaldo in the summer for a £99.2m fee, you couldn’t blame Juventus fans for thinking that this year they might be treated to Champions League glory. The Old Lady last won the competition back in 1996 and on four occasions since they’ve gone as far as the final, only to fall at the final hurdle.

In total the Turin outfit have now been runners-up in this competition an incredible seven times, with only three sides having appeared in the final more often. None the less, for a side with the stature of Juventus, 22 years is a long wait for a major European title but could this season be the one where their efforts finally pay off?

The early odds for the 2018-19 Champions League saw Juventus trading at around the 11/1 mark to go all the way but this had shrunk to 7/1 after their dealings in the transfer window. Their odds have dropped even more after beginning Group H so strongly, placing them firmly as one of the standout candidates to reign supreme in Europe’s finest club competition. With no shortage of talented sides also gunning for glory though, just how do Juventus’ chances stack up against the rest?

Many people were quick to laugh off early rumours that Cristiano Ronaldo, Mr. Real Madrid, was seeking a move away from the Spanish capital. The Portuguese star had been at the club since 2009, making 438 appearances in this time and had just enjoyed Champions League success for the third consecutive year. The rumours linking him away did not subside however as Juventus emerged as one of the leading candidates to be his next suitor. Before too long a four-year deal was penned, much to the excitement of fans of the Old Lady. Later, the five time Ballon d’Or winner revealed in an open letter that his wish to leave stemmed from a desire for a new challenge in his career.

What the signing of Ronaldo promised, aside from shirt sales and masses of publicity, was goals and a real abundance of them. He had netted 450 times for Real Madrid and his 120 goal tally in the Champions League is a record unmatched by any player in history. Having the competition’s all-time leading scoring among your squad is something that could help give Juventus a killer edge in this year’s Champions League.

The Old Lady have long been known for their defensive strength but now they have a formidable weapon at the other end of the pitch. Many players would have begun their decline at Ronaldo’s age but the global superstar’s average of a goal per game last season shows he’s still got masses of ability. He has reinvented himself more than once in his career, subtly altering his playing style, and given his remarkable physical condition, his stated aim of playing until he is 40 doesn’t seem impossible.

Ronaldo was not the only piece of business Juventus did over the summer. The Turin club signed Emre Can on a free transfer from Liverpool and spent nearly £70m extra on Joao Cancelo and Douglas Costa. They also were willing to part with two players in order to complete a swap deal for Leonardo Bonucci.

Costa had previously been at the club on loan but after a series of impressive displays, his services were acquired on a permanent basis. The Brazilian is not a regular starter but he’s regularly proved an effective option of the bench, his searing pace the last thing tired defenders want to see late in the game.

Cancelo, signed from Valencia, has slotted in convincingly at right back, previously something of a problem position for Juventus. Max Allegri lacked a regular, reliable option in the number two position last season but the new Portuguese arrival appears to be a great solution.

The signings of Costa, Cancelo and Can were well received by the Juventus faithful but many fans were not too comfortable at the pursuit of former star Bonucci. The centre-back had left the club the season prior, penning a deal with rivals AC Milan and leaving him a less than popular figure among his then former fan base.

His talent and winning mentality made him someone Allegri wanted to bring back to the club though and although he was initially jeered, the Italian’s performances are helping in his quest for forgiveness. By bringing in the 31-year-old at the expense of the much younger Mattia Caldara, this shows that the Serie A champions are seeking immediate success. Given that Ronaldo likely only has a few years left at the very top level, the Juventus board are right to try and make the most of the current situation.

Recent Efforts in the Champions League

Massimiliano Allegri has been in charge at Juventus since 2014 and in this time they’ve won the Serie A title every year (indeed, they have won it every year since 2011-12). He’s been unable to transfer domestic success onto the European stage but efforts in the Champions League have always been credible. The Italian has twice taken his men to the final stage of the competition and on the other two occasions they were eliminated by the eventual winners (Bayern in 2014-15 & Real Madrid 2016-17).

Having lost on four occasions to the team that would be crowned champions, Juventus appear to be a side on the brink of Champions League glory. Real Madrid have foiled them on the last three occasions but having now taken their most dangerous weapon away from Los Blancos, the Old Lady should be confident if the two clubs meet again.

Out with the old guard

Several long-standing players left Juventus in the summer as Allegri sort to freshen up his side. Kwadwo Asamoah who had been at the club since 2012, left on a free transfer to Inter while 34-year-old Stephan Lichtsteiner, a player who arrived just a year earlier, departed for Arsenal. Claudio Marchisio’s 13 year spell in Turin also came to an end as he became another player who did not have his contract renewed.

The biggest departure of them all though was that of Gianluigi Buffon. It was thought that the 40-year-old was set for retirement after announcing last season’s Serie A finale would be his last for Juventus but he later secured a one year deal with PSG. The goalkeeping legend was unable to land the Champions League at Juve but might be set for one or two more attempts to do so with the big-spending Parsians.

Juventus paid €52m for Gigi Buffon back in 2001, a world record price for a goalkeeper and one that was only broken 17 years later when Liverpool purchased Allison. There’s no doubting the Italian was worth every penny but in his final season, performances were on the decline. He still remained a huge figure in the dressing room but Juventus is a side not short on leaders.

Former Arsenal man Wojciech Szczesny is his successor and the Pole has clearly benefited from working so closely with one of the greatest keepers of all time. It’s always emotional saying goodbye to a club legend but Juventus should be better off with a keeper closer to their prime and one who’s already proven to be a dependable figure. 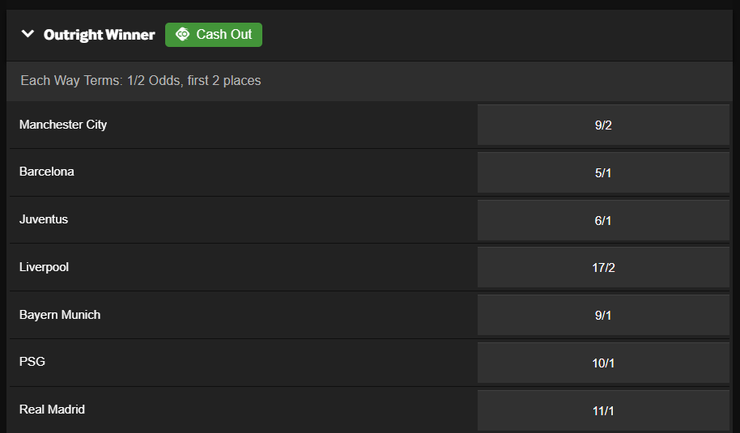 Big things have been expected from Manchester City in Europe ever since Pep Guardiola took charge. Having benefited from masses of financial investment, the Spaniard’s richly assembled side has the quality but there sometimes seems to be a nervousness to their play in the Champions League.

This perhaps stems from their lack of experience in the competition, not something that former five time champions Barcelona lack in any capacity. While not in their absolute prime, any team with Lionel Messi will always stand a chance of success. The Argentine has exceed the 100 goal mark in the Champions League and will now have his eyes on catching up to Cristiano Ronaldo’s total. Messi will miss a number of games with a broken arm but that could well see him that little bit fresher when the business end of the competition arrives.

PSG have yet to see a return on their spending in the Champions League, failing to go further than the quarter-finals since their Qatari owners took control. Their squad on paper looks able to compete but some pundits are of the opinion that the French league doesn’t give them enough practice against challenging sides.

No assessment of the main contenders for the 2018-19 Champions League crown would be complete without including Real Madrid. Poor domestic form didn’t hold them back in this competition last season as they made it three European titles in a row. Defending their title will be a big ask without Zinedine Zidane and Cristiano Ronaldo but Los Blancos cannot be written off while they remain in the tournament.

Will This be Juve’s Season?

As always there are some top sides involved in the Champions League, all with decent claims to be the one lifting the trophy come May. Juventus are undoubtedly one of the strongest options of the lot though, a side nobody will be keen to face in the knockout stages.

Rock solid at the back and now with a formidable goalscorer up top, the Old Lady have not looked quite this imposing for some time. Having made major improvements to a squad that has already come so close to Champions League success, Allegri could finally put an end to his side’s barren patch in this competition. Time will tell but the bookies make the Italians third favourites at odds of just 6/1 now and that looks reasonable value to us.