The number of people flying drones has increased substantially in recent years. Not only are they fun to fly but having eyes in the sky opens up a world of opportunities to record footage you would not normally be able to see. While drones are responsible for an increasing number of stunning shots and videos that appear on social media and beyond, users are not free to fly them wherever they please.

There are strict rules and regulations regarding drone usage, including where they cannot be flown. Search the news and you will find no shortage of examples of people getting into trouble for flying drones around prohibited areas such as near airports or military bases. What about football matches though? Are these also out of bounds for drones or do they allow fans to legally watch the action without needing a ticket?

What The Law Says

Most European countries implement localised rules regarding drone flying to align with the European Aviation Safety Agency. Each country will have its own authority though and in the UK the rule-setters are the UK Civil Aviation Authority (CAA). As well as covering things such as gliders, parachuting and even flying certain kites, the CAA has a firm focus on drones too. Although there is a long list of rules to follow, the main ones for the Open A1 and A3 categories, for a drone over 250g in weight, are as follows:

It is these final two points that prohibit anyone flying within the Open A1 and A3 categories to film a football match. Not only do fans at football matches count as ‘crowded together’ but a football stadium would be considered a recreational area, at least when there is a game on. This is why South Yorkshire Police were forced to investigate when someone flew a drone over a match between Rotherham and Sheffield Wednesday despite no fans being present.

From a football perspective, the rules in place ensure that the players are safe (not struck by a drone) and that a drone does not cause a disturbance to the match. Adherence to the rules also ensures that no part of the stadium could be damaged by a drone as some do weigh a considerable amount. Lastly, although not an intentional measure, not having drones around stadiums, prevents some people from being able to watch a game live without buying a ticket.

Without any rules in place, you could feasible imagine some sold-out matches having a swarm of drones overhead to capture the action. So far, all our talk has related to the Open A1 and A3 categories as is this is where most ‘for leisure’ drone users fall into. With the A2 Category, however, drone pilots can fly within 30m of people or even 5m at slow speeds (no more than 3 m/s). It does not, however, allow any overflight of people in any circumstances so even so the same limitations would apply.

What Happens If A Drone Is Spotted During A Match?

Because any drone poses a safety risk, or could even be a possible terrorist threat, any game would normally be suspended until the drone is captured. To give you a couple of examples look at the games between Mansfield and Scunthorpe or Rosario Central and Newell’s Old Boys. It is possible for a drone to go unnoticed though, especially if they avoid going right above the ground. Just because an incident is not noted at the time though does not mean the pilot will escape punishment. One man was fined £1,800 for illegally flying his drone above various sporting matches including a North London derby and a Champions League match involving Liverpool and Ludogorets.

Before his conviction, the first of its kind in the UK, the pilot had twice been arrested and had his drones confiscated. As this did not deter him though, a harsher punishment was required. The actual offences committed in his case were flying a drone over a congested area and not maintaining direct visual contact with the drone. Ignorance of the law is certainly no defence but in this case, he had been warned so many times about his activities that the judge stated, “it was the height of arrogance in terms of public safety.”

Can Drones Ever Be Used At A Football Match? 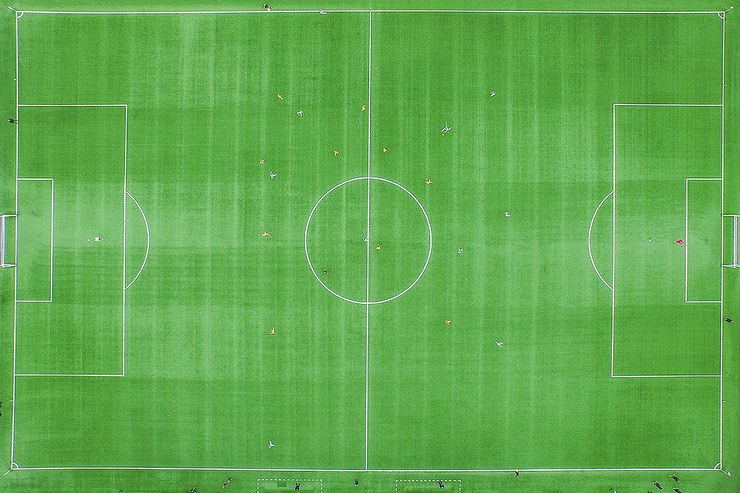 Yes, it is possible for a fully authorised drone to feature at a football match providing all the regulations are met and all paperwork completed. The 2017 Portuguese Cup Final (Taça de Portugal) saw the match ball delivered by a man standing on top of a drone in scenes that could have easily come straight from a Spiderman film. It is well worth watching for yourself if you have not seen it already.

Although not ‘proper’ football, an American football game involving Auburn and Texas had the match ball dropped from the sky by a drone. We mention this as it goes to show that even in countries with strict regulations on aviation, it is possible to have drones fly close to busy crowds. As things stand though, drones are very rarely used at football matches in any capacity. Even for the above-pitch stadium shots you sometimes see on television, these come courtesy of the Spidercam, which is a camera suspended by cables, rather than a drone.

Has There Been Any Drone Related Incidents? 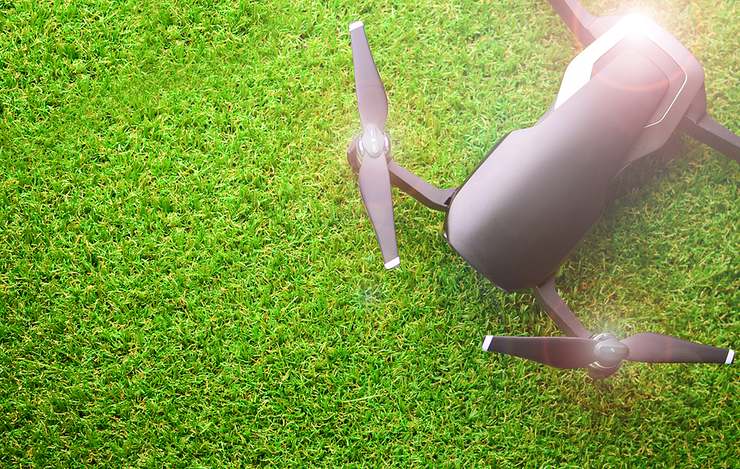 Although drones can pose a risk to others, especially during windy conditions or if there is an inexperienced pilot, we cannot find any incidents of a fan or player being directly injured by one. That said, a drone did provoke some ugly scenes in a Euro 2016 match between Serbia and Albania. After 41 minutes, a drone lowered itself onto the pitch at Belgrade holding an Albanian flag that featured nationalist claims on the neighbouring territory.

With tensions between these two bitter rivals already high, the provocation proved too much for some Serbian fans who ran onto the pitch, attacking some Albanian players. The referee, Martin Atkinson, quickly ushered players off the pitch for a game that was later abandoned. The responsible figure was arrested for the incident the following year, although it was not a brother of PM Edi Rama who was initially accused in the immediate aftermath.

What Is The Alternative?

If you are wanting to watch a professional football match for free then your opportunities are limited. Some smaller stadiums have blocks of flats that overlook the pitch so you would need to befriend someone who lives in one of these. If you are, instead, wanting to spread a message during a football match then you can legally do this via the aid of a plane. In 2020, some Burnley fans paid for a banner flight that read ‘White Lives Matter Burnley’ during a game against Manchester City. No crime was committed here although Blackpool Airport did announce they would be suspending all banner-towing activity.

Most companies that deal with banner towing will not fly anything that would harm their reputation but they will be happy to fly anything else. In the Netherlands for instance, one plane flew over the national team’s training session urging manager Frank de Boer to play a 4-4-3 formation (rather than his usual 5-3-2).

Flying a drone near a football match is not only dangerous but it is very much illegal and could land you in trouble with the police if you are caught.

It is unclear if there would be any additional repercussions from a copyright standpoint if you film and broadcast footage from a game but either way it is not something you would want to find out.