NFTs, or non-fungible tokens to use their full name, have enjoyed a meteoric rise in popularity in recent years. Established in 2015, they did take some time to get going but in more recent times they have been gaining the attention of journalists, the general public and investors alike. In just the first quarter of 2021, NFT sales exceeded $2bn, making this an incredibly lucrative market for anyone with something valuable to sell.

You may well have seen new stories of people selling internet memes as NFTs. The iconic ‘Doge’ meme for instance sold for around $4m in June 2021, breaking the record amount paid for a meme NFT in the process. Despite the focus on such sales, or those relating to viral videos, NFTs can be used to purchase a unique copy of a whole range of things, such as music, art or films.

Something else you can also purchase via NFTs is virtual trading cards and this is where NFT Fantasy Football comes in. A French company named Sorare has created a global fantasy football game featuring limited digital cards. It is a completely new way of playing fantasy football and with big cash prizes up for grabs, it is managing to attract a growing number of players. 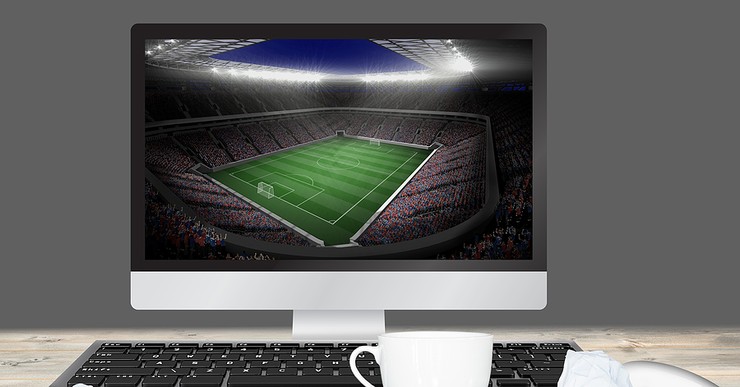 If you are completely unfamiliar with the concept of fantasy football, let us give you a very quick run-down. Oh and also: where have you been for the last 20 years?! The general premise of such games is that you take the role of a ‘manager’ by selecting real-life players to play in your squad. Your players will then earn you points based on their actual performances in matches. During the season you can also trade players when you deem necessary, perhaps due to injury or suffering from bad form.

There are a wide variety of fantasy football games out there but many are free to play. Some, despite the no-cost entry, will issue prizes to the best performing managers. Groups of friends also create their own prize pots by asking all members to chip in a certain amount. NFT Fantasy Football, run by Sorare, is technically free to play too but you will struggle to get anything back without some investment.

This is because when a new player signs up, Sorare only hands them a few ‘common’ cards to get going. From these common cards you will select what you deem to be the best five and hope they perform well in real-life. Goals, assists, clean sheets and the like are all things that will earn you points but there is much more as we will explain shortly. The bulk of common cards will not produce that many points though and additionally, they cannot be traded. The main purpose of issuing these free common cards is simply to give new players a taster of the game and hopefully leave them wanting more. Cunning people these Sorare lot.

Above is the best team we could produce using our common cards. Note that each team must have at least one goalkeeper, defender, midfielder and forward. The 5% bonus is because each card is active for the current season (2021-22) while the 25% bonus for Marco Verratti is because he was our captain selection for this particular week. 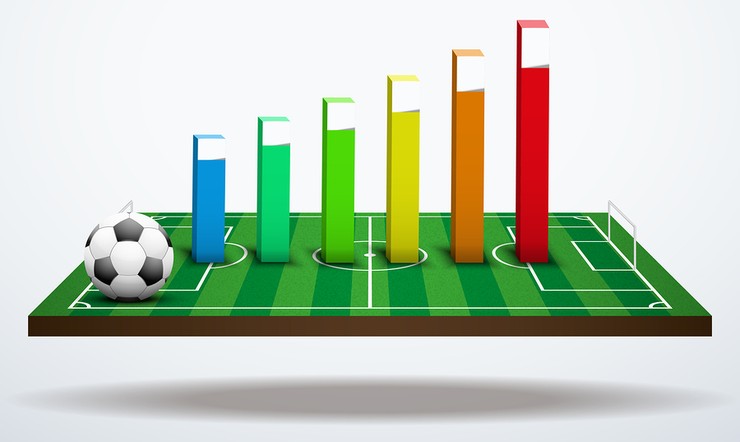 Many, more traditional fantasy football games, use a very basic scoring system in which players only have a few ways of racking up points. NFT Fantasy Football is much more advanced than this and in fact, it uses two different scoring systems per game. The first is a ‘decisive’ score and these are basically significant contributions both good and bad. Goals, assists, goal-line clearances, winning a penalty will all gain points while a red card, own goal or error leading to goal will lose points. This is not a conclusive list but you get the picture.

The other type of scoring involved is the ‘all-around score’ and this is not something you can feasibly keep track of yourself during a game. A huge variety of in-game metrics are used for this including possession lost, crosses blocked, accurate long balls and big chances created. Goalkeepers also have their separate metrics to allow them to gain meaningful points. 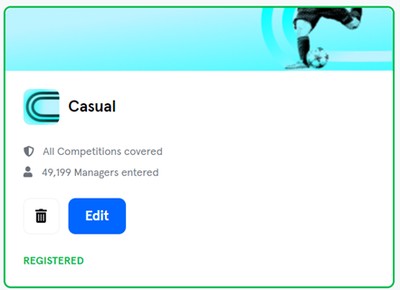 Another way Sorare’s NFT Fantasy Football differs from normal is the league system. Normally, all registered players on the platform are competing against each other, while there is also the possibility to create league leagues among friends or family. NFT Fantasy Football however has many different leagues, all of which come with certain card requirements. It is these requirements that ensure you cannot simply get by using just the free common cards issued to you after signing up.

When you start off you will only have entry to the ‘casual’ league, a league which requires five common cards to play. The prize pot for this league is as follows:

Most other leagues however require you to have better cards to take part. There are leagues for limited, rare, super rare and unique cards to ensure there are no huge imbalances between teams. Also note that this structure usually applies across the different leagues, whether it be all-star (no-restrictions on players), under 23 league, or regional leagues for example ‘champion Europe’. There are lots of regional leagues in operation, perfect for fans that only really follow football on a particular continent.

To get your hands on rarer cards, you can either win them by performing well in competitions or you can purchase them with real money. All players are licence by a club or league and all cards are unique, generated individually on a Blockchain. Due to this, there is provable scarcity of cards and they cannot be duplicated. There are four levels of ‘scarcity’ as seen by the images below. 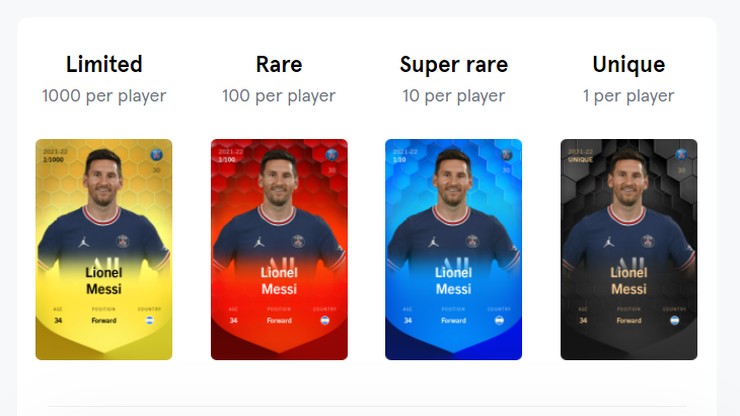 A unique Lionel Messi would be a huge amount of money because there is only one of him. The card itself would have a unique token ID. Using this token ID you can also see any previous transactions that have taken place.

Sorare releases many cards themselves, placing them up for auction. Managers are also able to sell players at a ‘buy now’ price, allowing other users to snap them up. In either case, the popularity of the game means that you will not be able to land sought-after cards on the cheap. There is also an extra premium to pay for the first issued card of its kind, much like is the case with artwork. You can see if a card is the first edition by looking at serial number in the top-left corner. To purchase a card, you can use the popular cryptocurrency Ethereum, which underpins this league, or your credit card.

By checking their personal bio of each player you can see how many cards of each type are in circulation at any one point.  On the same page you can also view all active auctions/offers as well as previous sales for that specific player.

There are two ways of receiving money through NFT Fantasy Football. The first is being a fantastic manager who has a great knack for picking the right players at the right time. Members who finish within the top three of a certain division are well rewarded. First place in the rare all-star league for instance would pay out over €2300. This may not seem like that much given that you could easily spend more than that on your team, but this is a weekly prize rather than being one fought for over a whole season.

The other way of recording a profit is simply by trading players. There is nothing stopping you from buying a player for €1,000 one week and flipping them from twice the price the next. There is absolutely no guarantee in this of course, but should you have a player that enjoyed a big breakthrough appearance or perhaps a transfer to a better team, then your asset will become instantly more valuable.

Conversely though, if a player suffers a long-term injury or indeed retirees, then interest in your card will decrease significantly. On that note, retired players are not removed from the game and you will still own them, but they cannot be selected as part of your five-man squad. 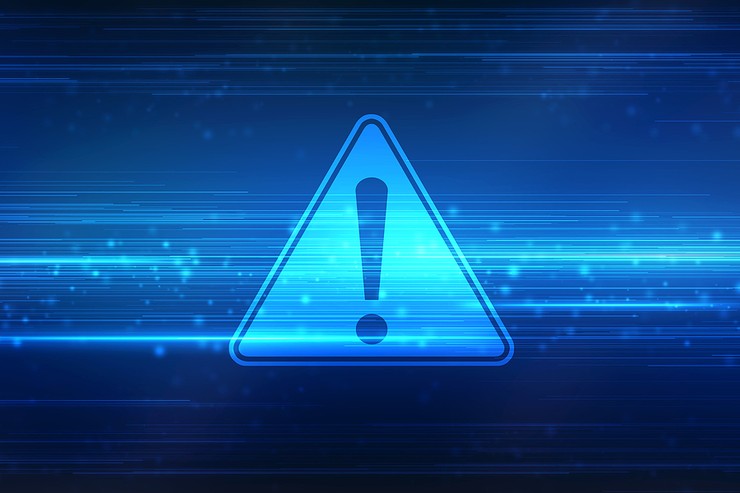 After witnessing the spectacular collapse of Football Index, a website that saw customers sell and buy virtual stocks in players, there are no doubt people looking at Sorare with caution. One thing Football Index had, although ultimately it did not mean much, was that it was fully licensed by the UK Gambling Commission. This not currently the case with Sorare however. Customers from the UK can use the site, in spite of this, because it is not currently considered to be a ‘gambling product’.

In October 2021, the Gambling Commission confirmed they are looking into whether or not Sorare will need a licence to operate in the UK and indeed whether they are providing a ‘gambling service’. Should the answer be yes it seems hard to see how they would continue to serve UK-based customers given the UKGC’s stance on cryptocurrency. Sorare however appear confident that what it offers would not fall under the UKGC’s jurisdiction. We shall see.

If you are tempted by venturing into the world of NFT Fantasy Football, you may take some comfort in the fact it has some high-profile names on board. Barcelona’s Gerard Pique is a strategic advisor while both Antoine Griezmann and Andre Schurrle are investors. Safe to say, they probably have deeper pockets than your average player though.

That said, there are many other investors too, as in September 2021, Sorare raised $680m in funding to support its efforts, valuing the company at a massive $4.3bn. This is no guarantee of longevity of course but it is seemingly a well-funded and popular endeavour with in excess of 150,000 members selecting and trading cards each month. It has grown very quickly in a short space of time but it will really need to continue that if it is to justify such a weighty valuation.

From a punter’s point of view we would advise extreme caution. Do not fall foul of hype and FOMO (fear of missing out). Unless you fully understand the product, cryptos and NFTs, this may be one fantasy football game you are best watching from the sidelines, at least for now.