They say money can’t buy you happiness. But can it buy you success? In the money-dominated sport of football, we often hear clubs being accused of “buying titles”. In every major country, the top leagues are dominated by the biggest, richest clubs – in some cases, just one club – who buy the best players and win the majority of the trophies. The gap between the elite clubs and the rest appears to be ever-growing, as illustrated in the grossest way last year when 12 of Europe’s leading (richest) clubs attempted to form a breakaway ‘Super League’ – a plan that thankfully failed after a widespread backlash.

It’s only logical that clubs with more money perform better on the pitch. In theory, the better the players, the more they will cost and the higher their salary will be; so the more money you have at your disposal, the more you can spend on transfer fees and wages, thereby attracting the best players. This not only gives you the best chance to win leagues and cups, but it also weakens your main rivals as they cannot acquire the players you sweep up. More money in the bank also means you can afford better facilities, better coaches and so on. And if that then leads to success, the club only becomes more attractive and richer, so it’s something of a snowball effect.

In 2013, then West Ham manager Sam Allardyce bemoaned, in typically no-nonsense fashion, that “where you actually finish in the league depends on the money you’ve spent”. Is it as simple as that, though? Well, to a degree it is. If we look specifically at wage spend, then there is a clear correlation between the amount spent and the team’s performance.

The Premier League is a prime example of this. In the 2020/21 season, the six biggest spenders on wages were the traditional ‘Big Six’: Manchester United, Chelsea, Manchester City, Liverpool, Arsenal and Tottenham Hotspur. There was also a gap of over £40 million between Tottenham in sixth and Crystal Palace in seventh – the biggest gap in the table – as the below chart from Spotrac illustrates: 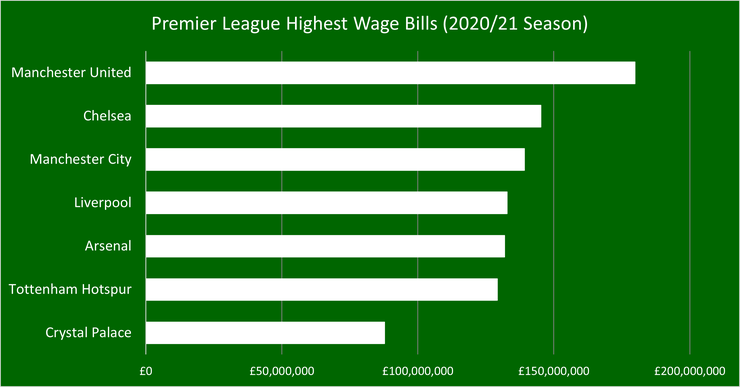 In the 2020/21 season, the top four positions in the Premier League were all claimed by teams in the ‘Big Six’, with Spurs and Arsenal finishing seventh and eighth respectively. Fifth and sixth places were taken by Leicester City and West Ham United – the ninth and 10th highest spenders respectively. 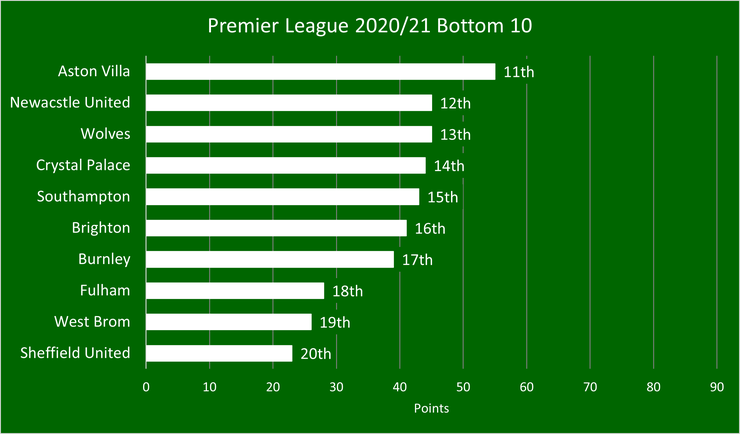 When looking at the correlation between the money spent on wages and the number of points gained in the season, there is a clear trend – more money generally means more points. 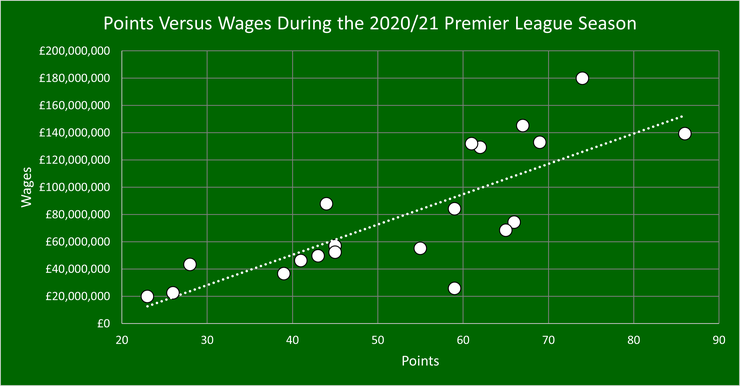 Interestingly, though, the club that have spent the most on player salaries in each of the last five Premier League seasons are Manchester United, and yet they haven’t won a single trophy in that time. Their estimated total salary spend for the 2021/22 season stands at a staggering £208.4 million (with Cristiano Ronaldo taking up a sizeable chunk of that), which is more than the lowest seven spenders combined. In recent years, the Red Devils have spent big money on signing players such as Jadon Sancho, Raphael Varane, Harry Maguire, Paul Pogba and Romelu Lukaku, but without sufficient return on their investment in terms of success on the pitch.

So, while it seems that high wage expenditure might ensure a certain level of success – for example, a minimum position in the table or European qualification – there are other, deeper factors that make the difference in the fight between the top clubs for titles. The Premier League is still relatively competitive in that respect, with four different clubs winning the title in the last six years.

The example of the Premier League is not the case in some other countries, where one club dominates. In Germany, for example, Bayern Munich have won the Bundesliga title for nine years running, and have pretty much been the dominant team in the country since the 1970s. Various clubs have challenged them at different points, but none has been able to really break the monopoly. Borussia Dortmund have been their main rivals in recent times, but their current tendency of developing talented young players and then selling them on for big profits means they are always going to struggle to match Bayern’s strength and experience.

Bayern Munich are not only the richest club in Germany but also by far the most successful, well-known and well-supported. Their success is built on attracting the best players in the country, thus weakening their rivals and maintaining their superiority, as well as producing their own homegrown talent and bringing in quality from abroad. Players go there in the confidence that they will win trophies. In the list of the top 10 richest clubs in the world, the Bavarians are the only representative from Germany, a country where there are stricter rules around ownership and where clubs are generally run in a more prudent way than in other major European countries.

Similarly in France, Paris Saint-Germain are the one dominant force and the only French side to have achieved any degree of success in the Champions League in recent times. They’ve won Ligue 1 in seven of the last nine years at the time of writing, and although their reign was briefly interrupted by Lille who won the 2020/21 title, normal service has been resumed in the 2021/22 season with PSG well clear at the top of the table at the time of writing. Here the dominance is more recent and perhaps more connected to spending power, having been taken over by (the deep-pocketed) Qatar Sports Investments in 2011.

Indeed, in most countries, there are a few teams who typically fight it out for the league title every season and qualify for European competition, and they are inevitably the clubs with the most money who spend the most on wages: Real Madrid and Barcelona in Spain, Ajax and PSV Eindhoven in the Netherlands, Juventus and the Milan clubs in Italy, and so on. While there might be the odd year when another team ‘do a Leicester’, overperform and surprisingly claim the crown, it’s hard for other clubs to break into and establish themselves at the top table on a sustainable and long-term basis. 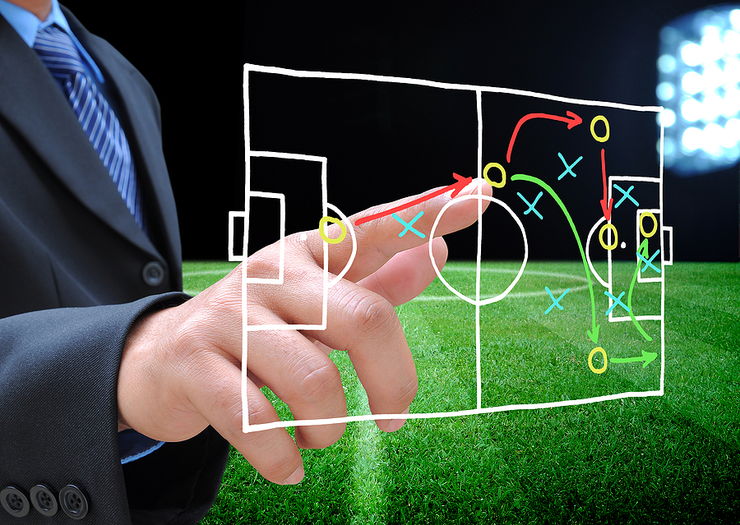 Increased investment and therefore increased spending on transfers and wages does not by itself transform a mid-table club into a top one overnight. “Rome wasn’t built in a day”, as they say, and creating success in football is a long-term process. If we look at some of the teams mentioned previously in this article, their success, history and reputation have been built up over time, and that gives them the foundation to achieve more in the future.

Take Manchester City and Liverpool, who have been the two best-performing teams in England in the last few years. Both have managers who have been at the helm for a long time – over six years in Jurgen Klopp’s case, and over five years for Pep Guardiola – and who have a clear philosophy and style of play. The clubs’ owners stay in the background and support the manager. Going back to Manchester United as a contrast (sorry, United fans), they have had five different permanent managers since Sir Alex Ferguson retired in 2013, while Chelsea have had five in the last six years.

Having that continuity and long-term vision is an important ingredient to success in football and indeed in business in general, but sadly something that is lacking in the modern, short-termist game. Impatient owners are only too willing to part company with coaches after a few bad results (we’re looking at you, Watford!). Increased investment may increase the chances of success but it also increases expectations and pressure from owners, fans and the media, who demand instant results.

It’s also about spending money in the right way and getting value, rather than just throwing money around. In 2018, Liverpool spent a combined £131 million on goalkeeper Alisson and centre-back Virgil van Dijk, two players in key positions who provided the team with exactly what it needed to take the next step up and become one of the best sides in Europe. Some questioned those transfer fees at the time… though they certainly aren’t questioning them now.

Manchester City, likewise, tend to make one or two big signings each transfer window, gradually tweaking and strengthening their side and replacing players when they move on, as opposed to making wholesale changes every year. Then, of course, you need the right management to get the best out of those players and fit them into a team, and this is perhaps where United have failed. That said, there is an argument that City’s achievements during the Sheikh Mansour era have been a little underwhelming given how much they’ve spent. Although they’ve dominated on the domestic front, they’re still yet to win the Champions League.

There are other cautionary tales that illustrate that being bought by wealthy owners is no direct route to the top. Since Farhad Moshiri completed his takeover of Everton six years ago, there has been no improvement in the team’s performance in the Premier League; if anything it has declined, with the Toffees hovering just above the relegation zone at the time of writing. Moshiri has been accused of poor decisions and reckless spending, with players such as Cenk Tosun and Jean-Philippe Gbamin sitting on big wage packets and not in the first-team picture. This again demonstrates how difficult it is for clubs to break into the established elite, even with increased spending power. It remains to be seen whether Newcastle United can spend their way out of trouble and become the next ‘superpower’ following their recent Saudi takeover, given that they, like Everton, are currently battling for their top-flight status.

Considering the evidence available, it’s fair to conclude that there is a strong correlation between spending on player (and manager) wages and success on the pitch. The simplest way to judge this is by looking at the league tables, and in every major European league, there is a group of wealthy, elite clubs who usually occupy the top positions each year. The Premier League table shows a clear link between salary spend and league position, with the odd variation and outlier here and there. And with the rich clubs getting richer, and player salaries and transfer fees continuing to rise in spite of Financial Fair Play regulations, this trend is only set to continue.

However, there are no guarantees in football, and spending huge sums on wages does not automatically result in success on the pitch. Long-term success is achieved by spending well, in the right areas and at the right time, coupled with good management, continuity and a long-term philosophy. Of course, that is easier to do for the richer clubs, but it takes time, as well as money.